The collection consists of six letters. Two of the letters (1812, 1814) were written by Landon Duncan to his uncle Alamander Duncan in Stokes County, North Carolina. Three of the letters (1837, n.d.) were written to his cousin Hiram Duncan of the same county. One letter (1836) was written by Jane H. Threves in Gallatin, Tennessee, to her cousin Hiram Duncan.

Many of the letters are addressed to the North Carolina Duncan family in Blakely, Stokes County, but a recent check (March 1998) of a North Carolina map shows that this town no longer exists.

Landon Duncan's religious convictions are evident in all of the letters he writes to his North Carolina relatives. In several of the letters he expounds at length about the nature of God's grace and his faith. Duncan also writes frequently about the current prices of basic goods such as pork and corn, and occasionally about his neighbors. In his letter of December 16, 1814, he gives his opinion of the draft laws passed in the Virginia legislature for War of 1812.

See the finding aid for the Landon Duncan Letters

Permission to publish from the Landon Duncan Letters must be obtained from Special Collections, Virginia Tech. 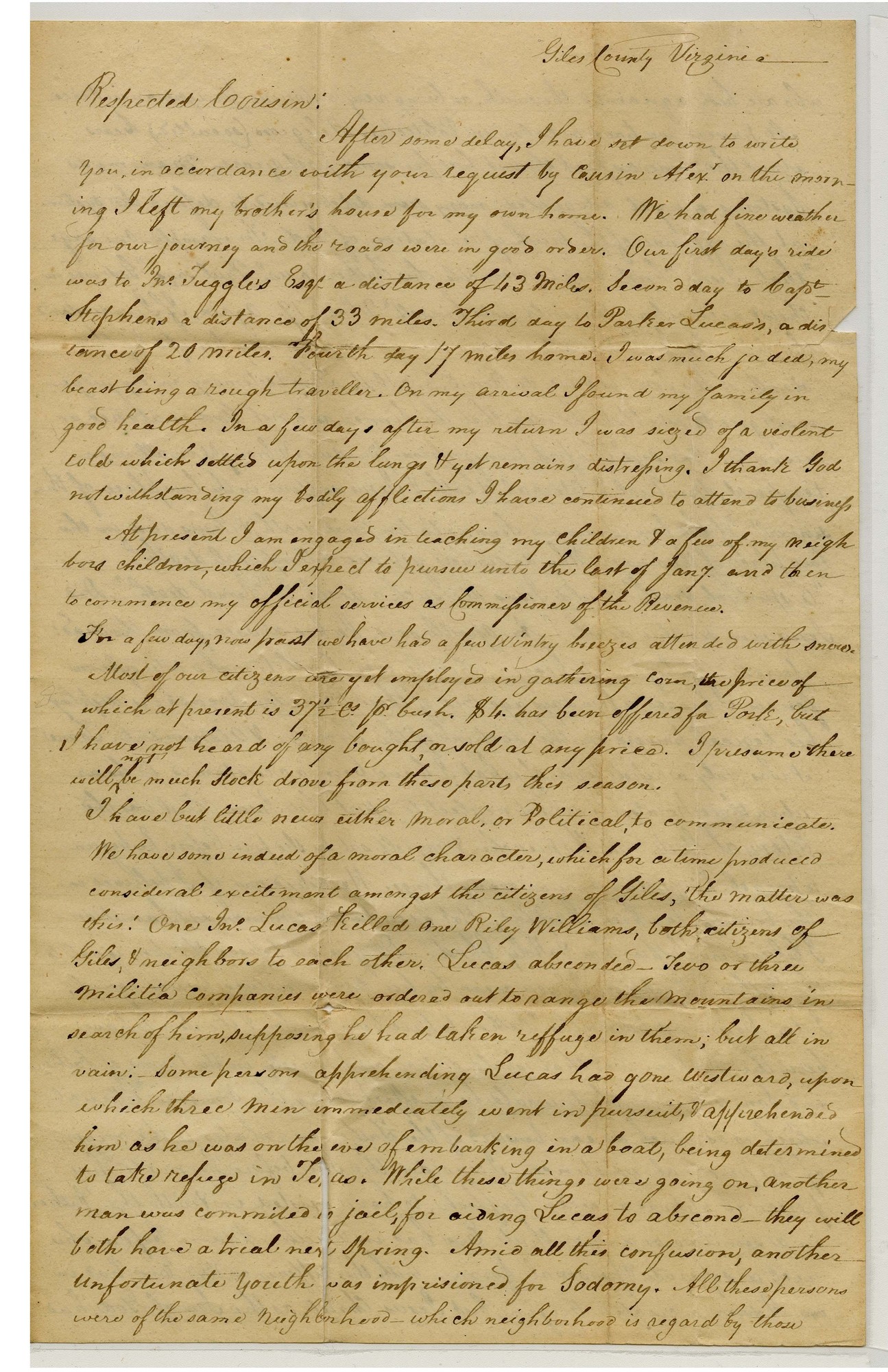 Duncan talks about a murder in Giles and the aftermath of the murderer's arrest. He talks about his religious views and comments on Biblical…

Duncan talks about the weather, its affect on the crops, and about the immoral conduct of his uncle. 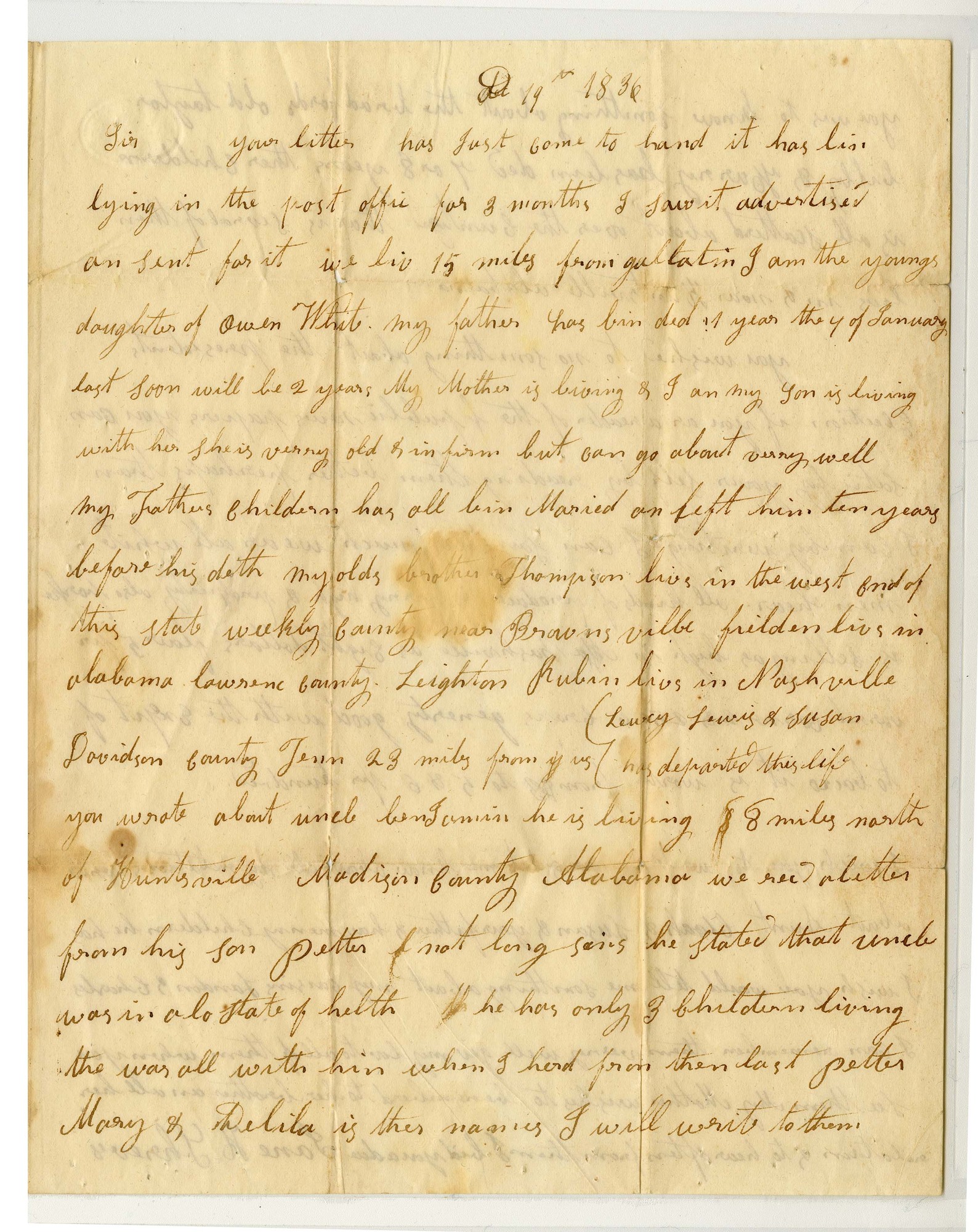 Threves talks about her family and where they all live. She also talks about the presidents election. 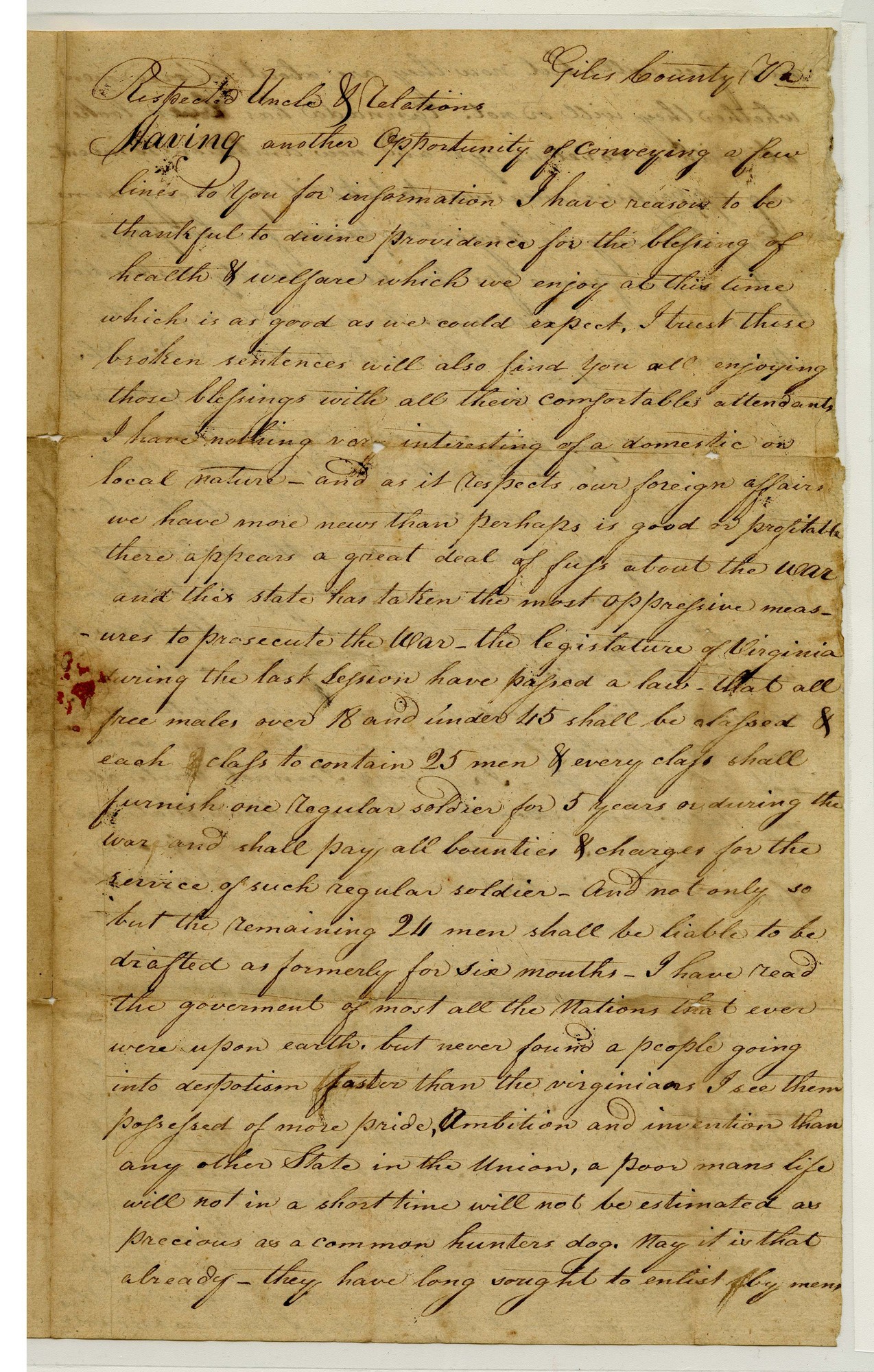 Duncan talks about newly passed laws in Virginia regarding soldiers. 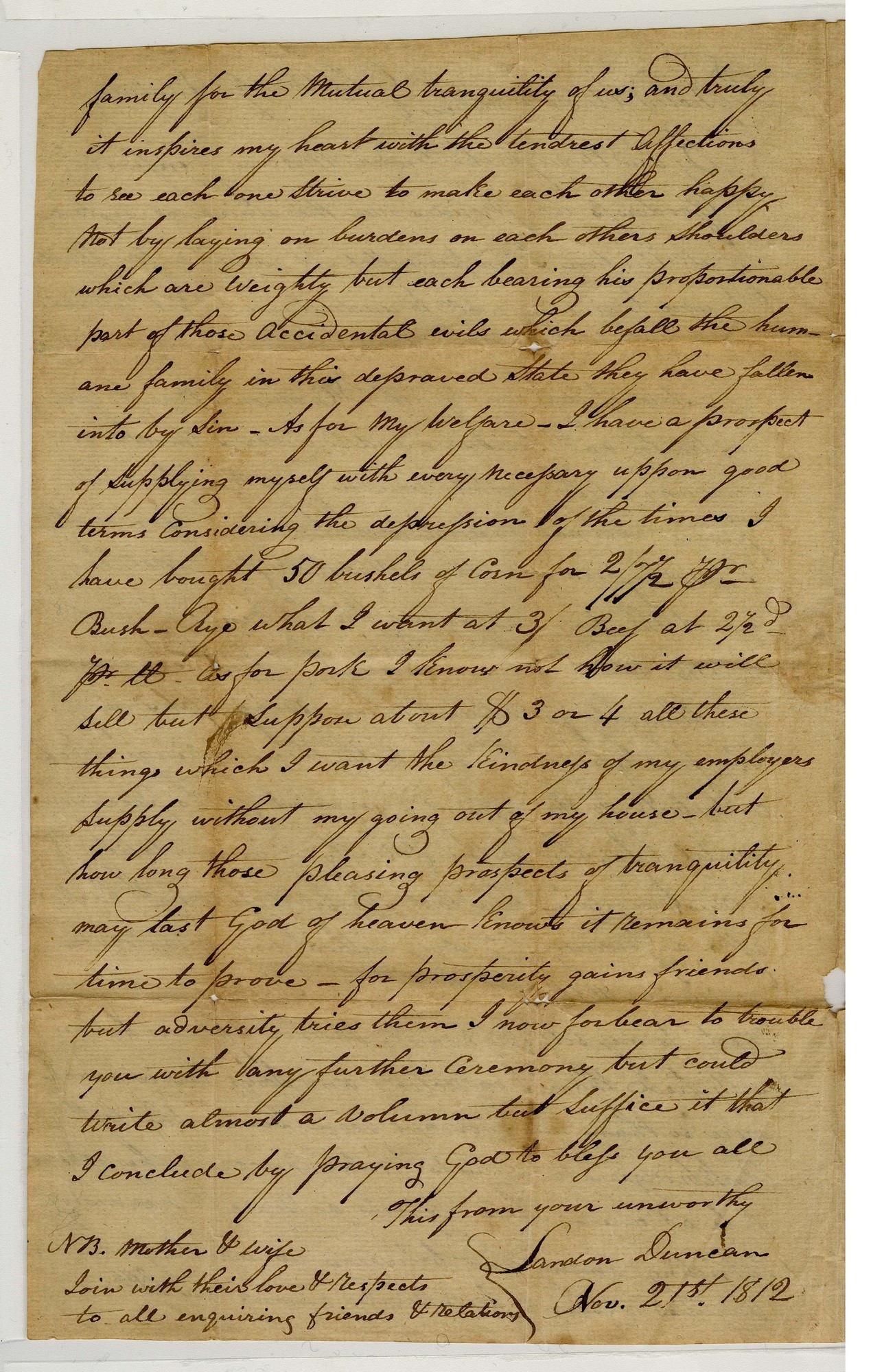 Duncan tells his uncle and relatives about his travels from his cousin's house and back to home as well as his health and welfare. 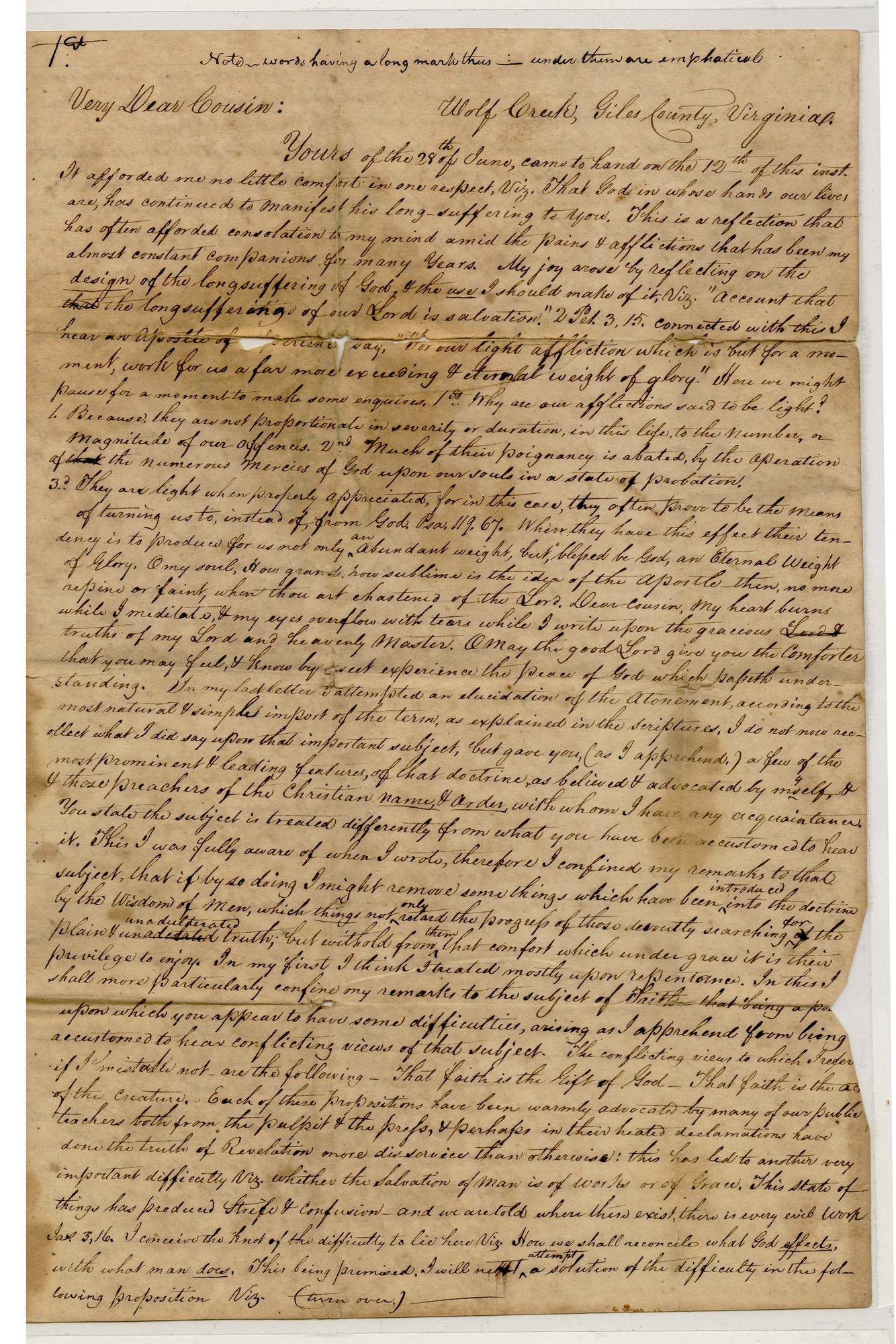 Duncan talks about his religious views and comments on Biblical scriptures.