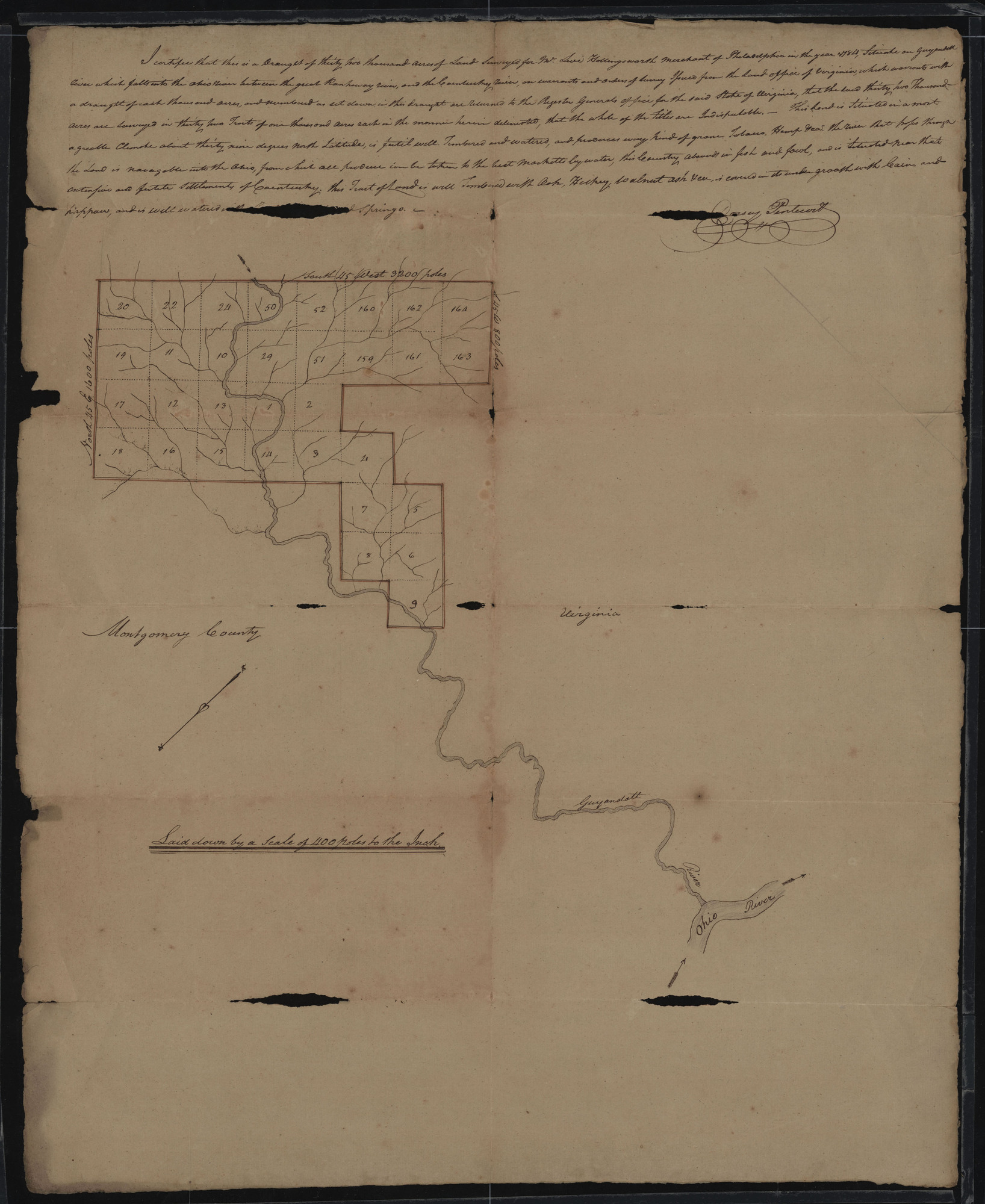 The collection consists of a manuscript map survey of land in Montgomery County, Virginia, belonging to Philadelphia merchant Levi Hollingsworth. The acreage, divided into thirty-two tracts of one thousand acres each, is situated on the Guyandotte River, a tributary of the Ohio, in present day West Virginia. The surveyor, Dorsey Pentecost, attests to the agreeable location of the land, which he says is in a fertile area, abundant in game, well-timbered, and producing crops of tobacco, among others. He also notes that Mr. Hollingsworth's land is 'situated near the extensive and fertile settlement of Caintucky.' The map is of Montgomery County as is was in 1784, not the modern-day Montgomery County.
Levi Hollingsworth, the youngest son of Zebulon Hollingsworth and Anne Maulden, was born in 1739 in Head of Elk, MD. The family, settled into Philadelphia, establishing themselves as a wealthy family of landholders in Maryland and Delaware. Levi became a merchant at the age of eighteen, building one of the most successful merchantile firms in Philadelphia. He specialized in the sell of grains, whiskey and flour. Levi Hollingsworth's death in 1824 coincided with the decline of Philadelphia as the center for the flour industry.
Levi Hollingsworth was a resolute patriot throughout the Revolution, serving under George Washington as the first quartermaster of the Light Horse of the City of Philadelphia and participating in the battles of Princeton and Trenton.
Marrying Hannah Paschall, daughter of a business partner, in 1768. They had eight children: Stephen Paschall, Lydia, Paschall, Margaret, Mary, Sarah, Henry, and Stephen.
The surveyor, Dorsey Pentecost was one of the leading citizens in southwestern Pennsylvania during the Revolutionary period . He is first listed in Frederick County, Virginia in 1768. In 1769, he acquired land in Rostraver Township, Westmoreland County, and likely moved there with his wife, Catherine Beeler, soon after their 1770 marriage. In 1777, he moved to what is now Linden, North Strabane Township, Washington County. He represented Washington County in the Supreme Executive Council from 1781-1783, and was a judge from 1783-1786.
Pentecost's name appears in many civil and military records. He was involved in land transactions from Illinois to Virginia. A full account of his life is given in Mary A. F. Diener's The Honorable Dorsey Pentecost, Esquire (Fresno, Calif: Pioneer Pub. Co., 1978). She was unable to find data on Pentecost's death. Best evidence is that he died in Kentucky in the spring of 1793.
In the 1790 census Pentecost was living in (North) Strabane Township. On November 4, 1790, the sheriff sold his farm to Levi Hollingsworth, Pentecost's land partner. When the 1793 tax list was made about December 1792, he was taxed for 1500 acres, 4 horses, 2 cows. The last of many civil actions involving Dorsey Pentecost is dated March 1793, when his attorney appeared for him.

See the Finding aid for the Montgomery County Land Survey

Permission to publish material from the [collection name] must be obtained from Special Collections, Virginia Tech.

Regional History and the Appalachian South